Get the first chapter of my book Demystifying Money absolutely free. You'll also receive occasional updates from me.

You need this book.

Get it free when you hit the button below and you'll learn the strategy we use with all of our clients.

Hitting the “Reset” Button With A Cleanse

So, in another foray into the world of self deprivation I just finished the Beachbody 3-day refresh cleanse. This means I haven’t had much to eat besides some shakes and vegetables in a few days. Why would I do this?

Shopping and spending wasn’t the only area I felt I went overboard in December.

I felt the need to do this cleanse to get my eating back under control. Over the holidays a lot of us find reasons to excuse our behavior – whether it be extra wine or buying something new to wear for a party. I wouldn’t want to change that part about the holidays EVER. I think it’s good to take a break every now and then (particularly when the food is amazing and I actually have plans).

But I could feel this fun “break” carrying over into January, no thanks to the weather and my kids’ new-found love for baking cookies. Time to get it together – especially when my no-shopping rule means my clothes have got to fit for the whole year!

The Nitty Gritty of The Cleanse – Starting With Breakfast

The cleanse itself isn’t bad – at least you get to eat solid food. You aren’t supposed to eat meat, dairy, and should eliminate caffeine, as well. I have discovered I CAN temporarily live without cheese, but I still had coffee (black – which isn’t my preference, but better than nothing). I put a little SToK Cold Brew Iced Coffee in my shake, and boy did it make things better.

I would have the chocolate shake blended with iced coffee and ice everyday if I had to (I usually add peanut butter and almond milk – it’s amazing). After this, I drank green tea, which I like. And it was definitely a change from knocking back a third cup of coffee (which is my usual routine).

The next part is the fiber sweep. I made the mistake of not putting enough water in once thinking it would help me chug it faster. It was a bad choice. It felt like I was drinking cold oatmeal, and I gagged the way my son does when I try to get him to eat anything that isn’t orange or beige (we’re going through a unique picky-eater phase over here at my house).

That shake was only a once-a-day deal, but it’s the absolute worst part of the program. Word to the wise – put the right amount of water in this one and shake as much as possible to avoid “chunks”, and drink it fast because it doesn’t age well.

Gagging again just thinking about it…

Lunch on the cleanse involved a vanilla shake, fruit, vegetable, and healthy fat. The vanilla shake is much better than the fiber sweep, but a distant second from the morning one.

I had some peppers and hummus, and an apple which tasted pretty good. This week has been busy, so lunch being quick was helpful. Mid-afternoon is another vegetable snack and healthy fat, which I almost skipped once because I didn’t feel that hungry and had about 7 meetings to distract me.

I did eat it as soon as I remembered because I could. This cleanse really helped me realize that I should opt for healthier snacks more often than I do. I’ve never been one to meal “prep”, but having fruits and vegetables in the house makes a lot of sense to me if you graze all day like I do – particularly when you work from home.

Dinner on the cleanse is another vanilla shake, and a healthy dinner option – which for me was steamed mixed vegetables with a little olive oil. They have more creative recipes in the booklet, but dinner time is usually chaos around here with the kiddos, so I went with the easiest option.

This wasn’t so bad, since I could at least sit and eat with my family. Of course, they decided to eat pizza one night which smells amazing. But I stayed strong – I was too close to the end of the cleanse to screw things up!

In the end, I lost 3 pounds doing this, and feel like I can once again eat normal sized meals (I believe “lumberjack” mode was my default for all of December), and not go overboard on the treats. It helps that sweets and junk food are finally out of the house after having a good run from Halloween to New Year’s Day.

I’m glad it is over, and wouldn’t do it every month, but would recommend this for anyone who needs a little correction when it comes to over indulging. What it has done is help me pay attention to what I’m doing and I hope to hold on to some of the good habits it reinforced going forward.

Now I’m off to get a medium cream only from Dunks! Hey, we all need to treat ourselves every once in a while, right? Anyone else ever try a cleanse like this? I’d be interested to hear about your experiences! 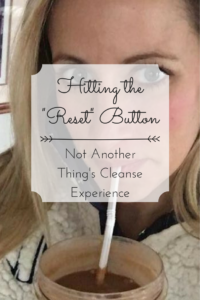