Free Video on Simplifying Your Finances

Discover the 5 easy steps you can take to simplify the entire money conversation. Fill out the form below to get it. You'll also receive occasional updates from me.

You need this book.

Get it free when you hit the button below and you'll learn the strategy we use with all of our clients.

I’m ready to start doing more exciting things now that I’m not shopping.  Yesterday I was lucky enough to get tickets to watch the Patriots win the AFC Title. It was also the first time I was really tempted to shop since the year began. Now, not everyone gets dressed up for football games. But the me from pre-shopping-ban would see ANY plans as a reason to go shopping and get something new to wear. I don’t have any Patriots gear aside from a hat, and really wanted to buy something.

Great advice on doing more with your life

I read something last week that really hit me. It was an article written by a woman named Holly Butcher, who recently passed away from cancer. She was only 27, and had some powerful advice about what really matters and what doesn’t. She wrote:

“It is a weird thing having money to spend at the end…when you’re dying. It’s not a time you go out and buy material things that you usually would, like a new dress. It makes you think how silly it is that we think it is worth spending so much money on new clothes and ‘things’ in our lives.

Buy your friend something kind instead of another dress, beauty product, or jewelry to wear to that next wedding.

1. No-one cares if you wear the same thing twice.

2. It feels good. Take them out for a meal, or better yet, cook them a meal. Shout their coffee. Give/ buy them a plant, a massage or a candle, and tell them you love them when you give it to them.”

She’s right – I gave my friend my other ticket and seeing her eyes well up as we took the lead in the 4th quarter was the best feeling. I could have been wearing a tutu and no one in that stadium would have cared one bit because I wasn’t Tom Brady and all eyes were on him. Gisele could have probably marched across the field in a ball gown at that point unnoticed. My real reason for spending money on things has much more to do with me enjoying shopping than needing something.

When I look at my budget, there has always been a blurred line between wants and needs. I want to have nice clothes, but I don’t need anything new because what I have is perfectly suitable for work and other places. I have more workout clothes than I will ever need based on a couple months of marathon training where my “treat” for hitting my weekly mileage goals was a new tank top or shorts. This was very fun, and built up my wardrobe, but it also wasn’t a cheap reward system. Other people use food as a reward in this same manner. It’s nice, but temporary – and forgettable.

Experiences, on the other hand, have benefits that last longer.

From buying a ticket to a show or a game to the actual event and then being able to look back on it – the process from start to finish is much more lasting than one trip to a register. Ask anyone who has been to Hamilton, or the Super Bowl, what the entire experience was worth – and I’m sure you will hear a story, and not a price. 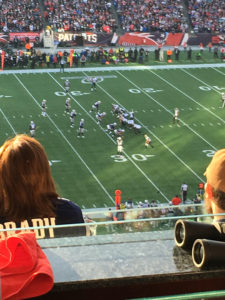 Spending money on things feels good temporarily, but the feeling goes away too fast. We won’t forget being at that game though. My friend is such a fan she probably will NEVER forget that game. This year will be about experiencing life with my family and friends. Experiences aren’t always cheap but there are things you can do that don’t cost a lot like going for a walk, or taking the dog to the park, that I hope to do on days that would normally be spent roaming the aisles of Target.

What experiences have you done that were 100% worth the money? What are some favorite inexpensive things to do with your family and friends?

Here’s the entire post that Holly wrote – it’s worth reading over and over again. 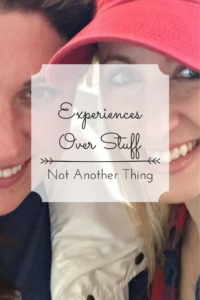 💸 Free Video on Simplifying Your Finances 💸

Discover the 5 easy steps you can take to simplify the entire money conversation. Fill out the form below to get it. You'll also receive occasional updates from me.